On February 10, 2015 I gave a keynote at Modelsward in Angers, France.

The speech focuses on the modeling of software UIs through graphical domain-specific languages and in particular shows the new standard adopted by OMG called IFML (Interaction Flow Modeling Language) at work. My presentation illustrates the basic concepts of IFML, presents the design best practices and integration with other modelling languages, and discusses some large-scale industrial experiences (also featuring quantitative measures of productivity) achieved through IFML and associated full code generation techniques.

The full video of my presentation (1 hour long, if you can endure it!) is available on Vimeo thanks to the Insticc service. See it here too:

After three years of work, IFML 1.0 is finally approved by the OMG!
The Interaction Flow Modeling Language was actually adopted one year ago, in March 2013, as Beta specification by the Object Management Group (OMG). Since then, the IFML Finalization Task Force worked hard to bring the specification to perfection.

All this summed up to 77 issues formally submitted to the OMG and subsequently addressed by the task force. The specification document, as well as the machine readable files (XMIs) have been cleaned up and prepared for final publication.
As a last step, the finalized version of the standard has been presented at the ADTF and at the Architecture Board of the OMG during the March technical meeting in Reston, VA, USA.
Version 1.0 is now officially adopted by the OMG. It’s just a matter of a few weeks before the final, copyedited version of the specification will be officially available on the OMG servers.
For documentation purposes, here is a snapshot of the program
Meanwhile, you can have a look at the sneak preview of the final version of IFML. Further details are available on the official www.ifml.org site.

As Stefano Butti, CEO of WebRatio said, IFML is one of the three biggest leaps in WebRatio history (together with the move to the US and the selection of WebRatio as Gartner Cool Vendor). Other vendors have already declared interest and/or started developing some modeling solution based on IFML. We look forward to wide adoption of this new standard, thanks also to the integration with other modeling aspects such as business modeling (with BPMN) and system modeling (with UML, SoaML, SysML, …)!

At the Reston event we also gave away the first copies ever of the very nice IFML Cheat Sheet (or Quick Reference Guide) prepared by WebRatio based on the official specification document.
The cheat sheet is available for free on the learning portal of WebRatio.

Here is a small photo gallery of the event location, the WebRatio booth and the program of the AB plenary where IFML was adopted. 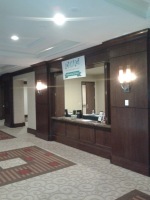 The Interaction Flow Modeling Language (IFML) is now one step closer to standardization by Object Management Group (OMG). On February 18 the revised version of the IFML specification has been submitted to OMG by a consortium lead by WebRatio and comprising also Fujitsu, Model Driven Solutions, Softeam, and Thales.
The new submission has improved a lot with respect to the previous version. It now includes:

IFML in a nutshell

In the UI mockup shown here, we have a user interface with a list of artists and, upon selection of one item, the visualization of the details of the selected artist.

If you want sneak peek on the IFML language, you can look at the presentation we gave at Code Generation 2012.
If you instead want have a look at the current state of the specification, here you can find the IFML specification document we submitted. This version is still a work in progress document and will be subject to the Architecture Board of OMG. We also look forward to comments and opinions from prospect users, adopters, and tool implementors. So, you are welcome to share your ideas!

The IFML specification document is online on the OMG.org site.

Additional information are available at ifml.org and on other posts in this blog.