In this study, we map the Twitter discourse around vaccinations in English along four years, in order to:

Datasets. We collected four years of Twitter data (January 2016 – January 2020) about vaccination, before the advent of the Covid-19 pandemic, using three keywords: ’vaccine’, ’vaccination’, and ’immunization’, obtaining around 6.5 MLN tweets. The collection has been analyzed across multiple dimensions and aspects. General

Analysis. The analysis shows that the number of tweets related to the topic in- creased through the years, peaking in 2019. Among others, we identified the 2019 measles outbreak as one of the main reasons for the growth, given the correlation of the tweets volume with CDC (Centers for Disease Control and Prevention) data on measles cases in the United States in 2019 and with the high number of newspaper articles on the topic, which both significantly increased in 2019. Other demographic, space-time, and content analysis have been performed too.

Subjects. Besides the general data analysis, we considered a number of specific topics often addressed within the vaccine conversation, such as the flu vaccine, hpv, polio, and others. We identified the temporal trends and performed specific analysis related to these subjects, also in connection with the respective media coverage.

News Sources. We analyzed the news sources most cited in the tweets, which include Youtube, NaturalNews (which is generally considered as a biased and fake news website) and Facebook. Overall, among the most cited sources, 32% can be labeled as reliable and 25% as conspiracy/fake news sources. Furthermore 32% of the references point to social networks (including Youtube). This analysis shows how social media and non-reliable sources of information frequently drive vaccine-related conversation on Twitter.

User Stance. We applied stance analysis on the authors of the tweets, to determine the user’s orientation toward a given (pre-chosen) target of interest. Our initial content analysis revealed that a large amount of the content is of satirical or derisive nature, causing a number of classification techniques to perform poorly on the dataset. Given that other studies considered the presence of stance-indicative hashtags as an effective way to discover polarized tweets and users, a rule-based classification was applied, based on a selection of 100+ hashtags that allowed to automatically classify a tweet as pro-vaccination or vaccination-skeptic, obtain- ing a total of 250,000+ classified tweets over the 4 years.

The words used by the two groups of users to discuss of vaccine-related topics are profoundly different, as are the sources of information they refer to. Anti-vaccine users cited mostly fake news websites and very few reliable sources, which are instead largely cited by pro-vaccine users. Social media (primarily Youtube) represent a large portion of linked content in both cases.

Additionally, we performed demographics (age, gender, ethnicity) and spatial analysis over the two categories of users with the aim of understanding the features of the two communities. Our analysis also shows to which extent the different states are polarized pro or against vaccination in the U.S. on Twitter.

A video presenting our research is available on YouTube:

This work has been presented at the IC2S2 conference.

The cover image  by NIAID is licensed under CC BY 2.0.

Online social media are changing the news industry and revolutionizing the traditional role of journalists and newspapers. In this scenario, investigating the behaviour of users in relationship to news sharing is relevant, as it provides means for understanding the impact of online news, their propagation within social communities, their impact on the formation of opinions, and also for effectively detecting individual stance relative to specific news or topics, as well as for understanding the role of journalism today.

Our contribution is two-fold.

First, we build a robust pipeline for collecting datasets describing news sharing; the pipeline takes as input a list of news sources and generates a large collection of articles, of the accounts that provide them on the social media either directly or by retweeting, and of the social activities performed by these accounts.

The dataset is published on Harvard Dataverse:

Second, we also provide a large-scale dataset that can be used to study the social behavior of Twitter users and their involvement in the dissemination of news items. Finally we show an application of our data collection in the context of political stance classification and we suggest other potential usages of the presented resources.

The code is published on GitHub:

The details of our approach is published in a paper at ICWSM 2019 accessible online.

You can cite the paper as:

Slides are on Slideshare: 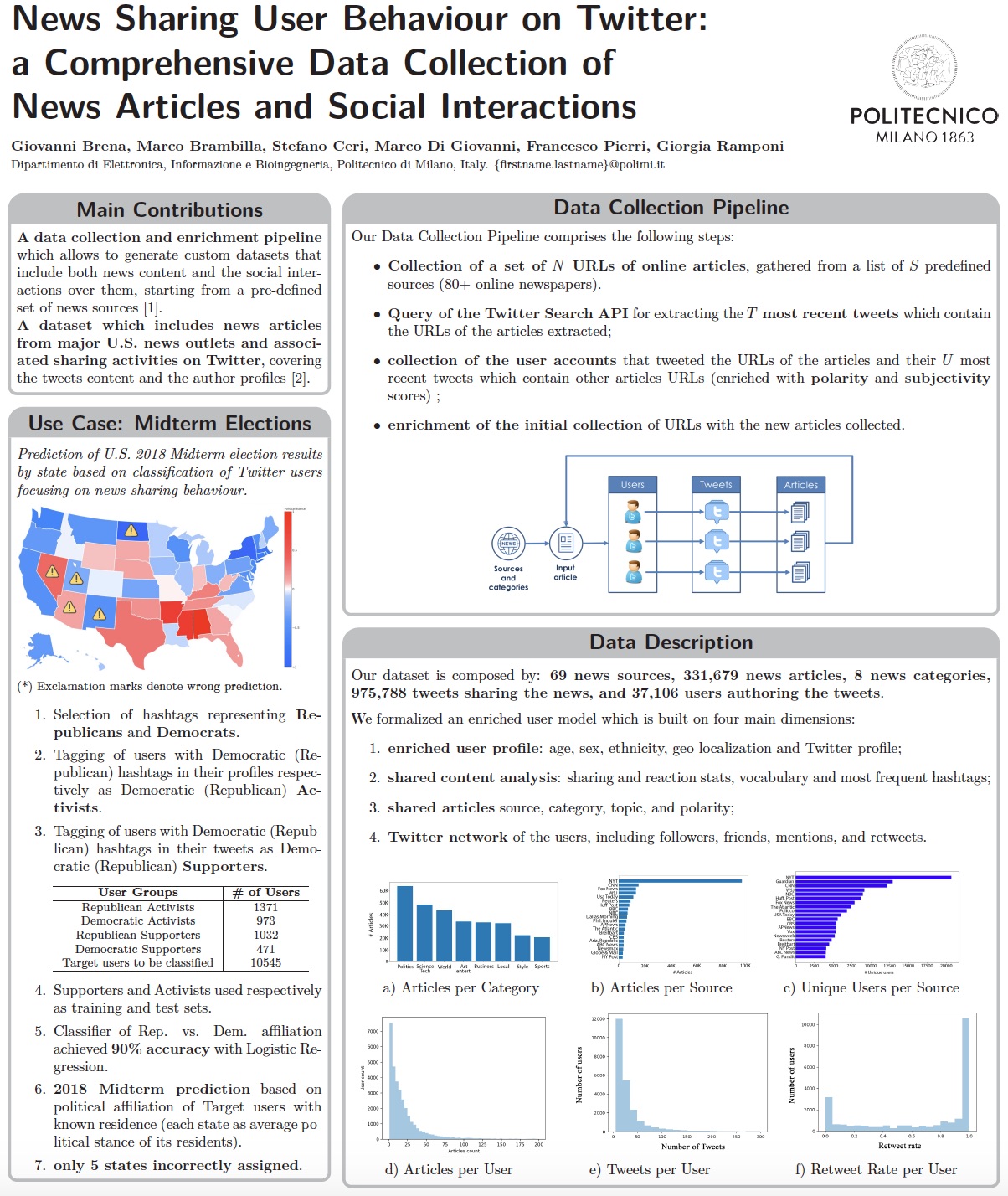