Front-end design of mobile applications is a complex and multidisciplinary task, where many perspectives intersect and the user experience must be perfectly tailored to the application objectives. However, development of mobile user interactions is still largely a manual task, which yields to high risks of errors, inconsistencies and inefficiencies.

The contribution of the AutoMobile research project (lead by WebRatio) is a model-driven approach to mobile application development based on the IFML standard by the OMG.

Eric Umuhoza, affiliated with Politecnico di Milano and Ecole des Mines de Nantes, presented the paper at MobiWIS 2014 regarding the research conducted in the AutoMobile project, lead by WebRatio.

Here are the slides of the presentation:

and here is the link to the paper published by Springer:

Code Generation, the premiere venue for model-driven addicted, is back in Cambridge for 2014!
If you are in the field of software modeling, software languages, design and development tools, model interpretation, executability and (of course) code generation, you should definitely attend the event.
The conference is a great mix of presentations, workshops and hands-on sessions.

We also gave our own presentation at Code Generation 2012 on WebRatio and IFML.
Here is the video of our presentation published on InfoQ.

This year the conference features a tutorial on Adaptive Embedded Development with Stephen Mellor, plus keynote speeches by Juha-Pekka Tolvanen (CEO of MetaCase) and by  Johan den Haan (CTO of Mendix). 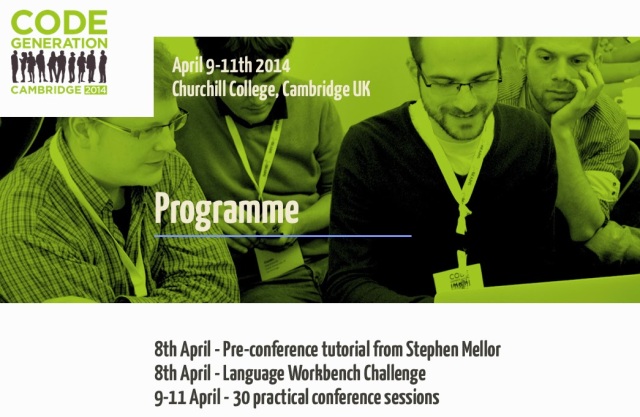 You can find more on the official conference web site:  http://codegeneration.net/cg2014/

A nice discussion has been triggered by Jean Bézivin yesterday on Twitter, starting from this video that gives an introduction to the Wolfram Language:

Wolfram Language introduces itself as a knowledge-based programming language. I think this is a very interesting and powerful approach. However, the online discussion among us modeling people focused on understanding the positioning of such an approach within the classical modeling approaches. Main questions discussed were:

In summary, I think we can say that Wolfram Language can be seen as a UNIVERSAL LANGUAGE (as opposed to domain-specific), because it aims at covering ontological knowledge of the universe. Interestingly enough, this also opened a side discussion on what is an ontology, in technical and philosophical sense, with Paola Bonomo, Erik Wilde and many others.
However, for being strictly universal, the language should be able to describe itself and to describe reality states in thorough way (and Jean-Jacques Dubray was disappointed about the coverage of this aspect by Wolfram). This raised the question of whether any language should be able to describe itself. I think the final conclusion was that this is not the case. For instance, DSLs typically do not span to describing themselves. And Meinte Boersma correctly pointed out that this is not the case even for most general-purpose languages.
So probably the property of self-description is a general, independent classification dimensions of languages, as suggested by Jean Bezivin. Actually, if you think about it, actually in the metamodeling stack only the M3-level (metametamodeling) languages satisfy self-descriptivity property!
A visual summary of the Twitter discussion is reported here:

If you have any insights on the topic, feel free to share it!