This is the summary of a joint contribution with Eric Umuhoza to ICEIS 2017 on Model-driven Development of User Interfaces for IoT via Domain-specific Components & Patterns.
Internet of Things technologies and applications are evolving and continuously gaining traction in all fields and environments, including homes, cities, services, industry and commercial enterprises. However, still many problems need to be addressed.
For instance, the IoT vision is mainly focused on the technological and infrastructure aspect, and on the management and analysis of the huge amount of generated data, while so far the development of front-end and user interfaces for IoT has not played a relevant role in research.
On the contrary, we believe that user interfaces in the IoT ecosystem they can play a key role in the acceptance of solutions by final adopters.
In this paper we present a model-driven approach to the design of IoT interfaces, by defining a specific visual design language and design patterns for IoT applications, and we show them at work. The language we propose is defined as an extension of the OMG standard language called IFML.

The slides of this talk are available online on Slideshare as usual:

Within ModelsWard 2016, just after the opening speech I gave on February 19 in Rome, the opening panel has been about the current maturity of model-driven engineering. I also hosted a poll on twitter on this matter (results are available in this other post).

I’m happy the panelists raised several issues I pointed out myself in the introduction to the conference: as software modelling scientists, we are facing big challenges nowadays, as the focus of modelling is shifting, due to the fact that now software is more and more pervasive, in fields like IoT, social network and social media, personal and wearable devices, and so on.

The debate obviously stirred around this aspects, starting from Bran Selic who asked a very simple question:

Isn’t it the case that the real problem is about the word “modeling”? In any other fields (architecture, mechanics, physics) modelling is implicit and obvious. Why not in our community? At the end, what we want to achieve is to raise abstraction and increase automation, nothing else.

Other issues have been raised too:

What’s your take on this issue?
Feel free to share your thoughts here or on Twitter, mentioning me  (@MarcoBrambi).
AND:
Respond to my poll on twitter!

Today September 24, 2015, a special event took place in Cambridge, MA: the OMG Standards At Work in the Industrial Internet of Things (IoT).

I have been asked to give a speech on the role of user interaction modelling within complex IoT system in industry: Internet of Things and Internet of People: The Role of User Interaction in the IIoT vision.

Ifml and IoT: modeling user interaction in the Internet of Things – by OMG and Marco Brambilla 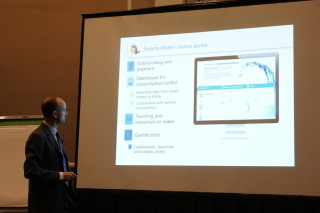 Here is my take on the topic: User interaction plays a crucial role in every system. This is true for IoT too. Sensors, actuators and intelligent things connected together can cooperate and exchange information, but their ultimate goal is to provide value to people. Such value can be perceived only through appropriate user interfaces, which visualise information (through dashboard, reports, or infographics), let user navigate the information, and also interact with the devices, by setting properties or regulating their behavior. That’s why it’s important that in the IIoT development context we consider also user interaction. In my presentation I introduced IFML, the Interaction Flow Modeling Language, the OMG standard that focuses on user interfaces and their integration with information systems, data sources, sensors and actuators. The presentation reports on some success stories from the industry, where IFML has been successfully applied. Large scale examples include consumer-oriented user interfaces, backend systems, data analysis dashboards, and interactions for command and control. Adopters include GE, Acer Computer, banks, utilities and military.

The other speakers of the event also provided interesting use cases, examples and insights on the span of the effort and potential of IoT, especially in the industrial environment. The speeches were as follows:

Find the full program of the day and materials by the other presenters here: OMG Standards for IIoT agenda.

What do SysML™, IFML™, SysA and DDS™ standards have in common, and how can they be put at work in the (Industrial) Internet of Things [IoT and IIoT] context?

To respond to this question, I will join a special event by the Object Management Group (OMG) on September 23, 2015, from 1:30 pm – 5:30 pm at the Cambridge, MA meeting.
The event will consist of short presentations of the standards, panels and discussions of industrial cases and will allow a closer look at how OMG standards are shaping the Industrial Internet of Things around the globe. OMG is joining forces with IIC (Industrial Internet Consortium) for covering IIoT.

The Industrial Internet of Things (IIoT) is delivering improved productivity, major cost savings, and streamlined processes to professionals from all industries. OMG has been active in IIoT standardization from long before “IIoT” became an industry buzzword.
This half-day information session brings together industry experts who will share case studies of these standards at work in the Industrial Internet, and present their vision of the future within this rapidly growing field. OMG is committed in supporting IIoT efforts and its standards cover several aspects of the field, as described here.
The topics covered during the event include:

The event is free and anyone can join. You can register to the event here:

You can find here the official page of the event, with the detailed program and other information.
To keep updated on my activities you can subscribe to the RSS feed of my blog or follow my twitter account (@MarcoBrambi).

Following up on my recent perspective that moves from model-driven development to hidden-model products, together with the Fluxedo team and in collaboration with WebRatio and Eurotech, we launched a new product called EventOmeters.

EventOmeters allows businesses and event organizers to increase the effectiveness of their events, involving participants and being able to rely on certain measures for the analysis of returns on investment in trade fairs, music, sports and in general of any gathering of people.
The role of the partners is as follows:

EventOmeters has been already used in the context of the FuoriSalone, within the Milano Design Week. In this setting, the product featured around 20.000 downloads of the official mobile app of the event and an analysis of more than 110.000 social media posts.
You can find more on this at:
Here is the storified summary of the launch event that happened on April 21, 2015 in ExpoGate in Piazza Castello in Milano, Italy:
View the story “EventOmeters: the new actor in Event Management” on Storify
To keep updated on my activities you can subscribe to the RSS feed of my blog or follow my twitter account (@MarcoBrambi).

Once again, this year I gave a presentation at SMAU Milano together with WebRatio (with Matteo Sassi as a co-speaker).

The purpose this time was to show and inspire on how Mobile, Cloud and IoT are becoming concrete business opportunities.

We tried to give a different interpretation to these technology trends: At first glance, the technologies that integrate Cloud, Mobile andInternet of Things (IoT) are attractive only to industry leaders with the ability to invest huge budgets and resources (such as Google Nest or Philips HUE, for example). These technologies are becoming attractive for individual developers who implement solutions thanks to open-source hardware and systems, such as Arduino and Raspberry PI which then inevitably force them to make design compromises.

We showed how conceptual solutions like the one proposed by WebRatio offer a code less approach that gives companies the opportunity to enter as main players, without limitations, in this new Mobile, Cloud and IoT market.

By using WebRatio Platform, companies can model apps with the IFML language (Interaction Flow Modeling Language) and “rationalize” the interaction with the IoT networks (think of the interaction of the sensors on which the “Internet of Things” technology is based) and put them into operation directly in the Cloud. In this way, companies save on infrastructure costs and reduce the cost and time to design and build applications.  It is possible to design new applications in this context caring only to use the correct interfaces and focusing on the opportunities provided by this new technology.

Here is the presentation we gave (partly in Italian, but very visual):
Mobile + cloud + internet of things (iot) = new business.

Together with a few pictures of the event: 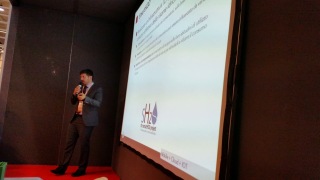 My other presentations at SMAU given in the past are:

Mobile, Cloud, BPM through MDD for fostering the business. Presentation at SMAU 2013

Trends and challenges in Business Process Management (BPM) at SMAU 2010

And my personal page on the SMAU site is: