In the context of Domain-Specific Modeling Language (DSML) development, the involvement of end-users is crucial to assure that the resulting language satisfies their needs.

In our paper presented at SLE 2017 in Vancouver, Canada, on October 24th within the SPLASH Conference context, we discuss how crowdsourcing tasks can exploited to assist in domain-specific language definition processes. This is in line with the vision towards cognification of model-driven engineering.

The slides are available on slideshare:

Indeed, crowdsourcing has emerged as a novel paradigm where humans are employed to perform computational and information collection tasks. In language design, by relying on the crowd, it is possible to show an early version of the language to a wider spectrum of users, thus increasing the validation scope and eventually promoting its acceptance and adoption.

We propose a systematic (and automatic) method for creating crowdsourcing campaigns aimed at refining the graphical notation of DSMLs. The method defines a set of steps to identify, create and order the questions for the crowd. As a result, developers are provided with a set of notation choices that best fit end-users’ needs. We also report on an experiment validating the approach.

Improving the quality of the language notation may improve dramatically acceptance and adoption, as well as the way people use your notation and the associated tools.

Essentially, our idea is to spawn to the crowd a bunch of questions regarding the concrete syntax of visual modeling languages, and collect opinions. Based on different strategies, we generate an optimal notation and then we check how good it is.

In the paper we also validate the approach and experiment it in a practical use case, namely studying some variations over the BPMN modeling language.

The full paper can be found here: https://dl.acm.org/citation.cfm?doid=3136014.3136033. The paper is titled: “Better Call the Crowd: Using Crowdsourcing to Shape the Notation of Domain-Specific Languages” and was co-authored by Marco Brambilla, Jordi Cabot, Javier Luis Cánovas Izquierdo, and Andrea Mauri.

You can also access the Web version on Jordi Cabot blog.

The artifacts described in this paper are also referenced on findresearch.org, namely referring to the following materials:

The work addresses the fact that in many crowd-based applications, the interaction with performers is decomposed in several tasks that, collectively, produce the desired results.
A number of emerging crowd-based applications cover very different scenarios, including opinion mining, multimedia data annotation, localised information gathering, marketing campaigns, expert response gathering, and so on.
In most of these scenarios, applications can be decomposed in tasks that collectively produce their results; Tasks interactions give rise to arbitrarily complex workflows.

In this paper we propose methods and tools for designing crowd-based workflows as interacting tasks.
We describe the modelling concepts that are useful in such framework, including typical workflow patterns, whose function is to decompose a cognitively complex task into simple interacting tasks so that the complex task is co-operatively solved.
We then discuss how workflows and patterns are managed by CrowdSearcher, a system for designing, deploying and monitoring applications on top of crowd-based systems, including social networks and crowdsourcing platforms. Tasks performed by humans consist of simple operations which apply to homogeneous objects; the complexity of aggregating and interpreting task results is embodied within the framework. We show our approach at work on a validation scenario and we report quantitative findings, which highlight the effect of workflow design on the final results.

Here are the slides presented by Alessandro Bozzon during the ICWE conference: 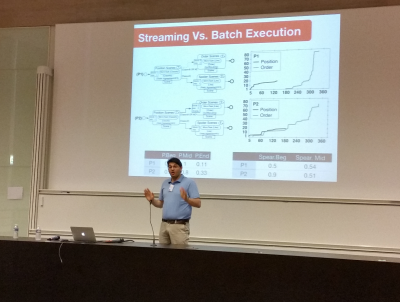 and here is the picture of the actual award: 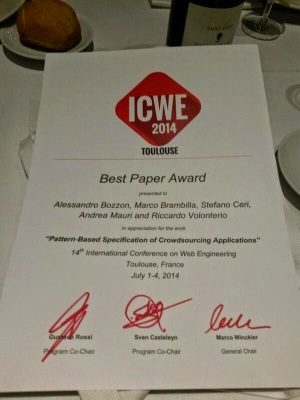 SOCM is the 2nd International Workshop on the Theory and Practice of Social Machines and is an interesting venue for discussing instrumentation, tooling, and software system aspects of online social network. The full program of the event is here.

Our paper is focused on community-based crowdsourcing applications, i.e. the ability of spawning crowdsourcing tasks upon multiple communities of performers, thus leveraging the peculiar characteristics and capabilities of the community members.
We show that dynamic adaptation of crowdsourcing campaigns to community behaviour is particularly relevant. We demonstrate that this approach can be very e ffective for obtaining answers from communities, with very di fferent size, precision, delay and cost, by exploiting the social networking relations and the features of the crowdsourcing task. We show the approach at work within the CrowdSearcher platform, which allows con figuring and dynamically adapting crowdsourcing campaigns tailored to different communities. We report on an experiment demonstrating the eff ectiveness of the approach.

The figure below shows a declarative reactive rule that dynamically adapts the crowdsourcing campaign by moving the task executions from a community of workers to another, when the average quality score of the community is below some threshold. 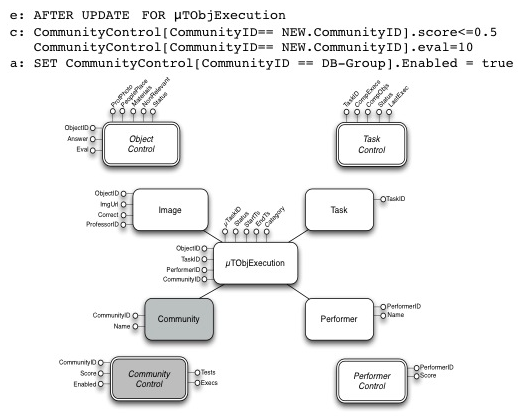 The slides of the presentation are available on Slideshare. If you want to know more or see some demos, please visit:

The full paper will be available on the ACM Digital Library shortly.

Expert selection is an important aspect of many Web applications, e.g.,  when they aim at matching contents, tasks or advertisement based on user profiles, possibly retrieved from social networks.

This was crucial for our current research on crowdsourcing, and therefore we dedicated a specific research line to this aspect. The main idea we developed was to define a model of the user expertise that takes into account user activities and roles, but also the profiles of his friends and acquaintances.

After one year of work with two M.Sc.  thesis students, we reported our results in a paper that has been presented by Stefano Ceri at EDBT 2013 in Genova.

You can look at the presentation here:

The paper focuses on selecting experts within the population of social networks, according to the information about the social activities of their users. We consider the following problem: given an expertise need (expressed for instance as a natural language query) and a set of social network members, who are the most knowledgeable people for addressing that need?
We considers social networks both as a source of expertise information and as a route to reach expert users, and define models and methods for evaluating people’s expertise by considering their profiles and by tracing their activities in social networks.
For matching queries to social resources, we use both text analysis and semantic annotation. An extensive set of experiments shows that the analysis of social activities, social relationships, and socially shared contents helps improving the effectiveness of an expert finding system.

The full paper will be available soon on the ACM Digital Library.