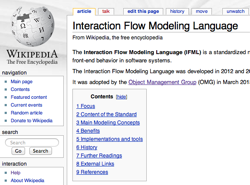 2 thoughts on “IFML is now adopted and published by OMG, Wikipedia, and YouTube”