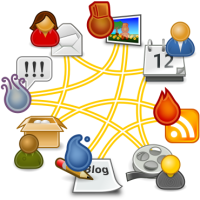 If you have been extensively using software modeling tools, you have probably experienced the awful situation where you want to move models from one tool to the other, but this ends up not being possible.
Why? Because you are using different languages? Not at all: even just moving a “standard” model from a modeler to another is a pain.
Concretely, each tool stores and manages the models with its own internal format or its own “dialect”, even if a standard format is adopted.

This is a major concern for developers, who need to check every time the actual possibility of exchanging the same kinds of models between editors, and often still need to struggle finding the mappings and defining the bridges between the formats by themselves. This hampers the possibility of effectively exploiting different tools in the development process. This is is definitely a minus for the developers, since having several tools at hand to be used upon the same model could allow to use the different features provided by the different vendors, based on availability but also taste of the developer himself. For instance, in an ideal world a developer could design the models with a modeling tool MT1 (e.g., because the editor of MT1 is more usable and allows higher productivity) and then immediately move to another tool MT2 for the verification phase (e.g., because MT2 provides more precise or extensive rules), and to tool MT3 for model execution (code generation or model interpretation, e.g., because it’s not provided by other tools).
Even in the case of well established standards like UML or BPMN, their abstract definition is still not enough for leading modeling tools from different vendors to share their models in a seamless way.

Interoperability is addressed also by standardization bodies. They are well aware that the supposed role of facilitating communication and information interchange that (standard) models should cover, is not a reality yet.
To improve interoperability between modeling tools, standardization bodies have defined specific model interchange languages. Examples of these languages can be found both for GPLs and for DSLs.
The most known model interchange language is XMI (XML Metadata Interchange), a standard proposed by OMG for serializing and exchanging UML models. Unfortunately, even if this has been devised as an interchange format, different tools still adopt it with different flavors. Therefore, the need arises of constraining the language even more. That’s why OMG is now running an activity for defining a canonical version of XMI (Canonical XMI), which is a strict subset of XMI and forces the adopters to follow stricter constraints.
A similar situation can be found in the most popular DSLs too. For instance, BPMN has an interchange counterpart in the XPDL language (XML Process Definition Language). In turn, this interchange language suffers of the same problems of XMI. Indeed, it is very difficult to actually move BPMN projects from a modeling environment to another.

This leads to my initial question:

14 thoughts on “Model interoperabilty in MDE: a lost battle?”